The TEV protease is cysteine protease from Tobacco Etch Virus (TEV) which is highly used for the cleavage of fusion proteins and removal of tags from recombinant proteins in vitro or in vivo. This enzyme belongs to chymotrypsin-like proteases and shows high sequence specificity.

Protean TEV Protease His6 is genetically modified 28 kDa recombinant protein. It is more efficient in proteolysis than the wild-type enzyme which can suffer from autoproteolysis leading to a truncated form with extremely reduced activity. The His6 tag at the N-terminus enables an easy purification of desired final protein by immobilization of the TEV Protease His6 on IMAC affinity resins and subsequent removal from the cleavage reaction.

The TEV protease prefers for recognition ENLYFQ|S(G,A) sequence, but it was shown that it can also cleave other motives with substitutions in the positions P2, P4, and P5 (EP5P4YP2Q|S(G,A)) which to some extent correspond with cleaving variability of natural enzyme in these sites. However, the processing efficiency is significantly lower even there are relatively conservative substitutions in the P4 (Leu to Phe) and P2 (Phe to Tyr) positions. The cleaving is always performed between Q (Gln) and S (Ser), which can be substituted with and G (Gly) or A (Ala) with a similar efficiency. 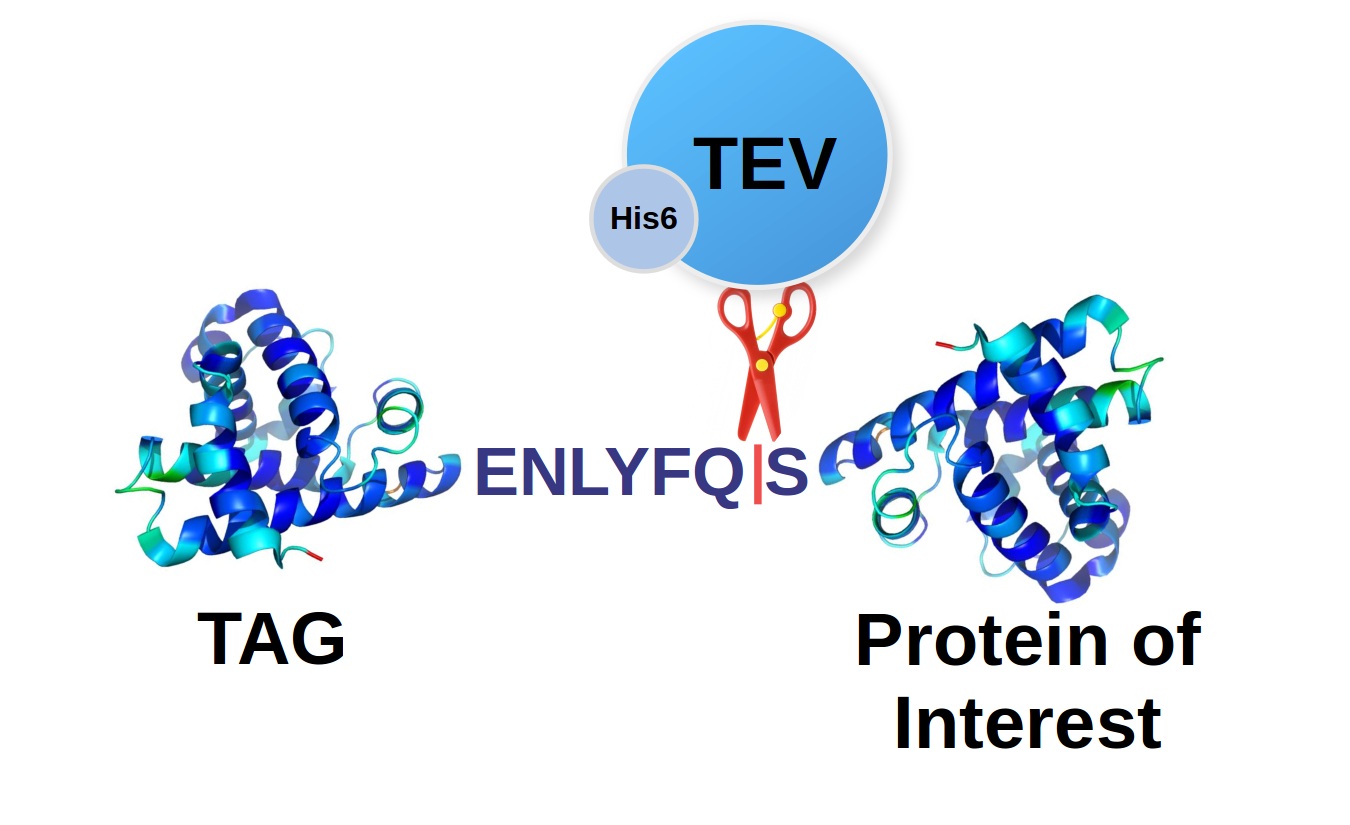 The TEV protease cleaving mechanism is based on „catalytic triad“ Cys-His-Asp where histidine works as base donating protons and activates cysteine nucleophile. Since there is cysteine within the triad instead of serine, it may be the reason for its resistance to commonly used protease inhibitors.

The standard reaction buffer of TEV protease contains 50 mM Tris-HCl, pH 8.0, 0.5 mM EDTA, and 1 mM DTT. The cleavage reaction should be incubated overnight in order to get a maximal cleavage, although, most of substrate cleavage happens in the first few hours. However. three hours of cleavage reaction are mostly sufficient as prolonged incubation times do not lead to proportional increases of cleavage. The TEV protease optimum temperature is 30°C, although it is active in relatively wide temperature range of 4-34°C. Typical reaction conditions used also for quality testing with our TEV protease substrate are as follows: 50ug of the #1409 TEV protease substrate is cleaved by 1ul (1ug) of the #1298 TEV Protease His6 for 3h at 30°C in the standard reaction buffer. Typically, more than 80% substrate cleavage should be achieved.

TEV protease does not belong to serine protease family and is therefore not sensitive to common protease inhibitors, such as PMSF and AEBSF (1mM), TLCK (1mM), Bestatin (1mg/ml), pepstatin A (1mM), EDTA (1mM), and E-64 (3mg/ml), and „complete” protease inhibitor cocktail (Roche). Zinc ions inhibit the activity of this enzyme at concentrations of 5 mM or greater. On the other hand, reagents that react with cysteine, like iodoacetamide or NEM, belong to efficacious inhibitors of the TEV protease.

Properties of the Protean TEV Protease His6

It is highly specific and active for its seven-amino acid sequence with minimal off-target effects. It has activity more than 10,000 units per 1 mg of protein. The activity depends on the type of target protein. The optimal amount of enzyme should be tested for each target protein.

The same day shipping, next day delivery by DHL Express